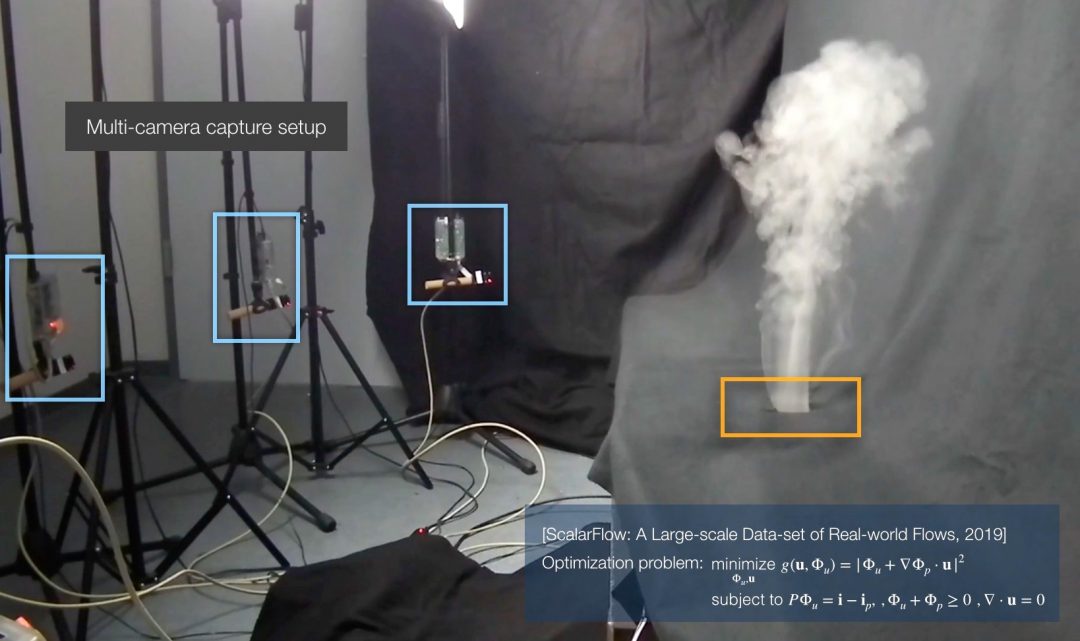 Our full scalarFlow data set, with almost half a terabyte size, is online now! You can request a download link via the following sign-up form. It contains more than 100 sequences of fluid flows reconstructed with a Navier-Stokes-based reconstruction algorithm. Also check out our data-set page which describes the full hardware setup. You “only” need a few Raspberry-Pi computers with cameras: https://ge.in.tum.de/publications/2019-scalarflow-eckert/

Paper Abstract: We present ScalarFlow, a first large-scale data set of reconstructions of real-world smoke plumes. In addition, we propose a framework for accurate physics-based reconstructions from a small number of video streams. Central components of our framework are a novel estimation of unseen inflow regions and an efficient optimization scheme constrained by a simulation to capture real-world fluids. Our data set includes a large number of complex natural buoyancy-driven flows. The flows transition to turbulence and contain observable scalar transport processes. As such, the ScalarFlow data set is tailored towards computer graphics, vision, and learning applications. The published data set will contain volumetric reconstructions of velocity and density as well as the corresponding input image sequences with calibration data, code, and instructions how to reproduce the commodity hardware capture setup. We further demonstrate one of the many potential applications: a first perceptual evaluation study, which reveals that the complexity of the reconstructed flows would require large simulation resolutions for regular solvers in order to recreate at least parts of the natural complexity contained in the captured data.

View all posts by GE_at_TUM