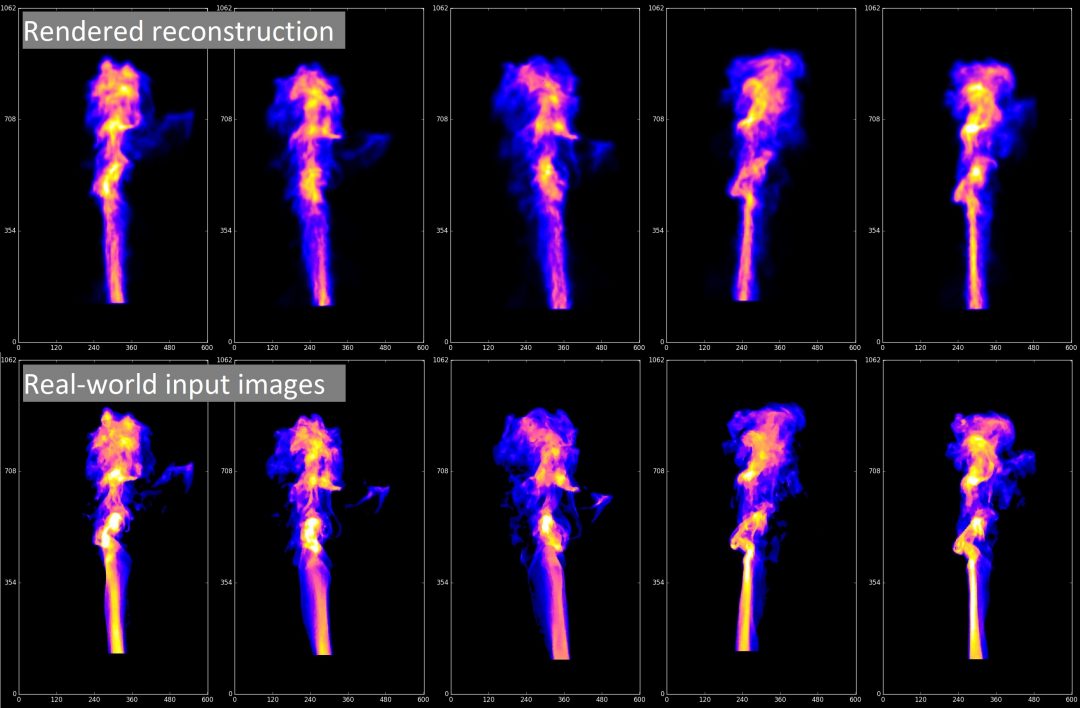 Abstract
In this paper, we present ScalarFlow, a first large-scale data set of reconstructions of real-world smoke plumes. In addition, we propose a framework for accurate physics-based reconstructions from a small number of video streams. Central components of our framework are a novel estimation of unseen inflow regions and an efficient optimization scheme constrained by a simulation to capture real-world fluids. Our data set includes a large number of complex natural buoyancy-driven flows. The flows transition to turbulence and contain observable scalar transport processes. As such, the ScalarFlow data set is tailored towards computer graphics, vision, and learning applications. The published data set will contain volumetric reconstructions of velocity and density as well as the corresponding input image sequences with calibration data, code, and instructions how to reproduce the commodity hardware capture setup. We further demonstrate one of the many potential applications: a first perceptual evaluation study, which reveals that the complexity of the reconstructed flows would require large simulation resolutions for regular solvers in order to recreate at least parts of the natural complexity contained in the captured data.

While numerical simulation is an established method to generate visually convincing and physically-based fluid effects, it is challenging for human artists to predict the resulting behavior and shape of a forward fluid simulation. Furthermore, in order to recreate the turbulent structures of real-world fluid flows without artifacts, high and hence expensive grid resolutions are required. Reconstructions of real-world flows based on 2D image sequences, on the other hand, follow the prescribed shapes and motion in the input videos. Therefore, reconstructions exhibit behavior known beforehand and also reproduce reality with its turbulent and interesting flows. An example for real-world input images and our reconstructed smoke plume rendered from the same camera views is shown on the very top of this page.

Fig. 1: Overview over our method, where the gray boxes are steps of a regular forward fluid solver and the blue and orange boxes indicate the main steps of our reconstruction technique.

It is very challenging to find a forward simulation whose 2D projections meet the given input image sequences of real-world fluids due to unknown initial or boundary conditions, external forces like buoyancy or ambient air motions, or internal forces like viscosity. Hence, we guide a 3D forward fluid simulation to meet our real-world 2D captures in order to reconstruct real phenomena in 3D. An overview of our reconstruction method is shown in Fig. 1.

We can use the reconstructed densities directly for re-rendering from different view points and to apply the reconstructed velocities for re-simulation, flow enhancement, guiding, or domain modification. We gather our reconstructions in the data set ScalarFlow. Density and velocity for 4 time steps and 10 samples are shown below in Fig. 2.

Fig. 2: 10 samples of our ScalarFlow data set with reconstructed density and velocity.